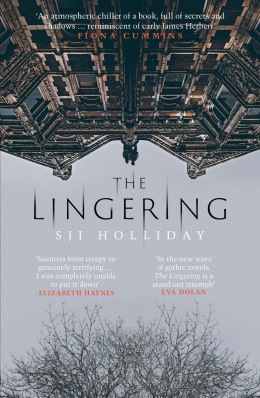 Married couple Jack and Ali Gardiner move to a self-sufficient commune in the English Fens, desperate for fresh start. The local village is known for the witches who once resided there and Rosalind House, where the commune has been established, is a former psychiatric home, with a disturbing history.
When Jack and Ali arrive, a chain of unexpected and unexplained events is set off, and it becomes clear that they are not all that they seem. As the residents become twitchy, and the villagers suspicious, events from the past come back to haunt them, and someone is seeking retribution…
At once an unnerving locked-room mystery, a chilling thriller and a dark and superbly wrought ghost story, The Lingering is an exceptionally plotted, terrifying and tantalisingly twisted novel by one of the most exciting authors in the genre.
My Thoughts
I am not used to horror books, I normally prefer mystery/murder/crime; but when you have the opportunity to read one of the new Orenda Books’ new acquisition, you can’t doubt that it will be a great book!
The Lingering is a slow paced story, told in first person by the main characters: Ali, Angela and Smeaton. We will read the journal of Dr Henry Baldock from 1955. Ali and his husband are escaping from their past, so they decided to leave everything behind and move to a small commune at the Rosalind House; they didn’t know what it was waiting for them there, but they hoped it would be much better that what they were hiding from…
This story has left me wanted to know more, not only of the characters but the story of the building and its past, the story is so addictive, intense and emotional that when you arrive at the end it feels like it could not have ended yet, it has to be more!
While we enter to the community routine, we will discover Ali and Jack past, but at the same time we will be aware of the past of the house they are living, and sometimes houses can talk, even if you will not like what you’ll learn…
I don’t want to make any spoilers of the story; sometimes is better entering a book without knowing what it will be inside, the surprise is much bigger! I will simply say that this is a worth reading book; atmospheric, dark, twisted and gripping… possibly it will be on your nightmares for your next couple of days, but when a book is good, it has to be read.
About The Author

S.J.I. (Susi) Holliday is a pharmaceutical statistician by day and a crime and horror fan by night. Her short stories have been published in many places and she was shortlisted for the inaugural CWA Margery Allingham prize with her story ‘Home from Home’, which was published in Ellery Queen Mystery Magazine in spring 2017. She is the bestselling author of the creepy and claustrophobic Banktoun trilogy (Black Wood, Willow Walk and The Damselfly) featuring the much-loved Sergeant Davie Gray, and has dabbled in festive crime with the critically acclaimed The Deaths of December. Her latest psychological thriller is modern gothic with more than a hint of the supernatural, which she loved writing due to her fascination and fear of ghosts. She is proud to be one of The Slice Girls has been described by David Mark as ‘Dark as a smoker’s lung.’ She divides her time between Edinburgh and London and you will find her at crime-fiction events in the UK and abroad.

2 thoughts on “The Lingering by S.J.I. Holliday – Blog Tour”