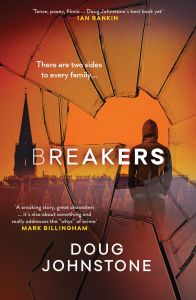 Seventeen-year-old Tyler lives in one of Edinburgh’s most deprived areas. Whilst trying to care for his little sister and his drug-addicted mother, he’s also coerced into robbing rich people’s homes by his bullying older siblings.
One night whilst on a job, his brother Barry stabs a homeowner and leaves her for dead. And that ’s just the beginning of their nightmare, because they soon discover the woman is the wife of Edinburgh’s biggest crime lord, Deke Holt.
With the police and the Holts closing in, and his shattered family in terrible danger, Tyler is running out of options, until he meets posh girl Flick in another stranger ’s house. Could she be his salvation? Or will he end up dragging her down with him?

This is a book that will make you see the world in a different way; rich and poor have to eat, everyone does whatever it takes to bring food to their homes. This is a book that tries to show us that the need to keep our families safe is always more important than anything else. Breakers will allow you to take a trip to the dark side of the society and understand their motives. Ready?
Breakers is the story of Tyler; a young guy that is trying to keep his family together; but when his last job ends badly; he will have to hide from the police and a crime gang.
This is not an easy read, the author has done an amazing job putting the reader in the worst case scenario and making them feel empathy for a not perfect guy, but a crime guy. Because let’s face it, Tyler loves his family and tries to keep them protected, but being in a poor family makes everything more difficult and his job is not one to envy, since he is following his sibling path, being a criminal.
Breakers is an amazing read, it covers so many themes that you’ll have to re-think of what you’ve read and talk about it. Survival, family and a little bit of love are mixed in this story, a read which you won’t be able to stop. Ready?

Doug Johnstone is an author, journalist and musician based in Edinburgh.
He’s had nine novels published, most recently Fault Lines. His previous novel, The Jump, was a finalist for the McIlvanney Prize for Scottish Crime Novel of the Year. Several of his other novels have been award winners and bestsellers, and he’s had short stories published in numerous anthologies and literary magazines. His work has been praised by the likes of Ian Rankin, Val McDermid and Irvine Welsh. Several of his novels have been optioned for film and television. Doug is also a Royal Literary Fund Consultant Fellow.
He’s worked as an RLF Fellow at Queen Margaret University, taught creative writing at Strathclyde University and William Purves Funeral Directors.
He mentors and assesses manuscripts for The Literary Consultancy and regularly tutors at Moniack Mhor writing retreat. Doug has released seven albums in various bands, and is drummer, vocalist and occasional guitarist for the Fun Lovin’ Crime Writers, a band of crime writers. He also reviews books for The Big Issue magazine, is player-manager for Scotland Writers Football Club and has a PhD in nuclear physics.

One thought on “Breakers by Doug Johnstone – Blog Tour”