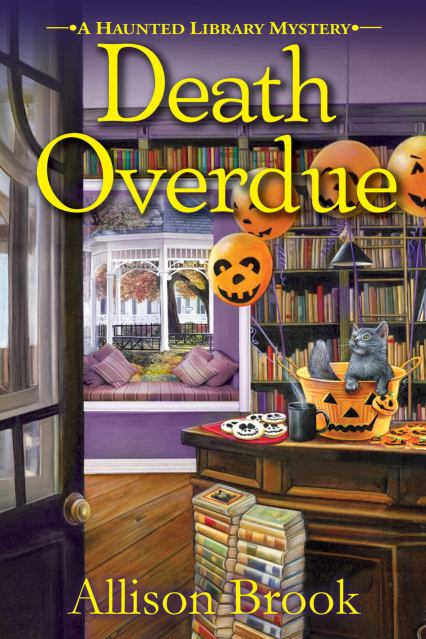 Carrie’s work at the library has improved and is doing something she loves, has a place to live and has family and friends that take care of her. But when her first organised event finishes with the guest dead, she can not stay away to discover the truth, and she will have a curious help… a library ghost! 😉
This has been a very entertaining book; interesting characters, an old investigation and some humour to make the read amend and enjoyable.
Carrie has a very interesting job at the library and being near books all day is my dream come true! She has quite different work companions, some nice others not so much… but she will have to face them if she really wants to discover the truth, your worst enemy could be your best friend… you never know!
I love reading about old cases in which some clues have appeared and could be solved after so many years, maybe that’s why I liked so much this book, but let me say it had all the ingredients to be a good cozy mystery and a very interesting new series. We have some hints of the main characters life, just enough to make you want to know more!
Ready for a murder at the library?
Interested? Good luck in the Giveaway! 😉
a Rafflecopter giveaway
https://widget-prime.rafflecopter.com/launch.js
I am lucky to have a guest post by the author, enjoy!
Why Ghosts Often Appear in My Novels — by Marilyn Levinson
Though I’ve never met a ghost, I’ve read enough about ghost sightings and hauntings to believe they exist. Experts in the field say some spirits remain earthbound because they’ve experienced a brutal or sudden death and don’t realize they’re dead. Others remain here because they have unfinished business or issues they need to resolve before passing on. Ghosts, whether you believe in them or not, have a permanent place in our literary lore. Readers find their manifestations unnerving, thrilling and intriguing. George and Marion Kirby in TOPPER and the sea captain in THE GHOST AND MRS. MUIR are three of my favorite literary spirits.
Ghosts appear in my mysteries DEATH OVERDUE and GIVING UP THE GHOST and in my YA GETTING BACK TO NORMAL. They are fully-developed characters who have remained on the Earthly plane to settle accounts. In DEATH OVERDUE, Evelyn Havers is the sixty-something ghost that haunts the Clover Ridge Library where she used to work. While invisible, she urges my sleuth Carrie Singleton not to turn down the position of Head of Programs and Events she is being offered.
Carrie takes Evelyn’s advice and soon discovers she has made the right decision.
When her first program presenter dies before her eyes and those of a roomful of library patrons, Carrie goes on to investigate his murder and that of the cold case he claimed to have solved. Evelyn helps Carrie in her investigation, but also holds back information for personal reasons. It isn’t until book three in the series that Carrie discovers Evelyn’s death was no accident but a deliberate act of murder.
Cameron Leeds, the ghost in GIVING UP THE GHOST, is a charismatic scoundrel. In life he was a good-looking man with a generous heart, except when he was wheeling and dealing often at his friends’ expense; a Romeo who flirted with every woman that crossed his path. Though his best friend, the town’s police chief, has declared his death an accident, Cam knows he was murdered. Trouble is, he doesn’t know who did it, and he can’t move on until he does. When Gabbie Meyerson rents his family’s cottage—the only place where he can manifest—Cam nags and cajoles until she agrees to investigate. Gabbie starts asking questions, and to her dismay discovers that several of Cam’s so-called friends and neighbors are glad he’s dead and possible suspects.
Twelve-year- old Vannie Taylor, the protagonist in GETTING BACK TO NORMAL, has just lost her mother and her father is a basket case without her. Vannie meets Archie the ghost, hours after her father has moved her and her brother to live in a dingy cottage on the estate where he manages events. Archie appears to be carefree and funny. Dressed in a tuxedo, he performs cartwheels and handstands. He’s overheard Vannie wondering aloud what to give her brother for dinner, and provides her with a simple recipe. He even tells her she can find the necessary ingredients in the mansion’s kitchen.
But Archie is far from carefree, as Vannie and her best friend discover when they research his life. He was twenty-five when he died chasing the thief who stole his wife’s necklace. Archie tells Vannie that before he can go to his rest, he must atone for having left his wife and their one-year- old son. She is astonished to learn that Mayda, her parents’ close friend and the last of the family that once owned the estate, is Archie’s granddaughter. Archie implores Vannie to encourage the budding relationship between her father and Mayda—the one thing Vannie doesn’t want to happen. But it may be the only way her life gets back to normal.
Real or imagined, ghosts, I believe, add a dimension to a novel.