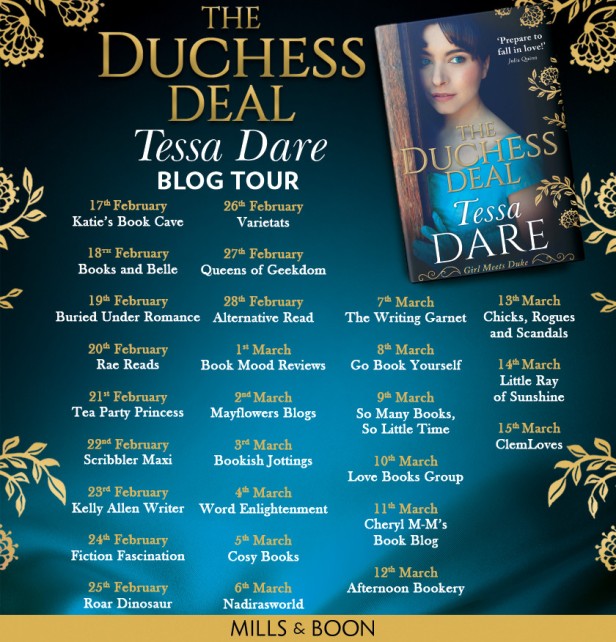 This is not a romance novel, because the Duke of Ashbury and Emma Gladstone don’t marry to fall in love, they are just following the rules they put on their contract when they decided to get married. Have a son on one side on the other have a civilized dinner every day with a little talk… seems easy isn’t it? If they follow the rules love will never have a space in their agreed marriage… or is what they think… Ready for the deal?

“Emma Gladstone had learned a few hard lessons by the age of two-and-twenty.
Charming princess weren’t always what they seemed. Shining armor went out of fashion with the Crusades. And if fairy godmothers existed, her was running several years late.
Most of the time, a girl needed to rescue herself.
This afternoon was one of those times.”

Let me say that I had so much fun reading this book! The verbal fights between Emma and Ash are hilarious, really sometimes I almost cried for so much laugh!
This book is about love, redemption and acceptance, easy to say, more difficult to accept. Emma and Ash have their own baggage, and if they want this marriage to succeed they have to be trustworthy between each other apart of accepting their faults, of course. It will not be easy, both of them had lost the things they thought were the most important of their lives, so they will have to learn to respect and trust someone..
The only thing that I didn’t like very much was that it seems that even if Emma loves to know what Ash does in his every day routines and respect all of their weird hobbies, he can not accept that she is really good sewing and creating dresses, he should learn some respect to Emma and her desires and dreams.
I have to admit that it was not just the main story that was interesting, there are a few secondary characters that stole my heart, and I hope we will see them on a next book! Can we be updated too on Emma and Ash? I am sure they will have much more to say…!
I can assure you that if you start reading this book you will fall in love with Emma and Ash, their love story is unique and enchanting!
Ready to be the Duchess?

Here is a little extract to tempt you…

Her hands went to the side of the gown. She began to release a row of hooks hidden in the bodice seam. One by one by one. As the bodice went slack, her squeezed breasts relaxed to their natural fullness. The sleeve fell off her shoulder, revealing the tissue-thin fabric of her shift.
A wisp of dark hair tumbled free, kissing her collarbone.
Jesu Maria.
“Stop.”
She froze and looked up. “Stop?”
He cursed silently. Don’t ask me twice. “Stop.”
Ash could scarcely believe he’d managed the decency to say it once. He’d been on the verge of a private show for the price of two pounds, three. Significantly higher than the going rate, but a bargain when the girl was this pretty.
Not to mention, she was a vicar’s daughter. He’d always dreamed of debauching a vicar’s daughter. Really, what man hadn’t? However, he was not quite so diabolical as to accomplish it through extortion.
A thought occurred to him. Maybe—just maybe—he could still manage that fantasy, through different, somewhat less fiendish, means. He regarded Emma Gladstone from a fresh angle, thinking of that list of requirements in his interrupted letter.
She was young and healthy. She was educated. She came from gentry, and she was willing to disrobe in front of him.
Most importantly, she was desperate.
She’d do.
In fact, she’d do very well indeed.
“Here is your choice, Miss Gladstone. I can pay you the two pounds, three shillings.”
He placed the stack of coins on the desk. She stared at them hungrily.
“Or,” he said, “I can make you a duchess.”