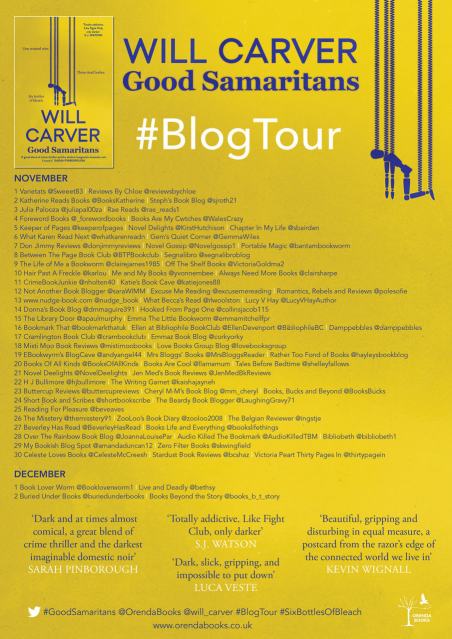 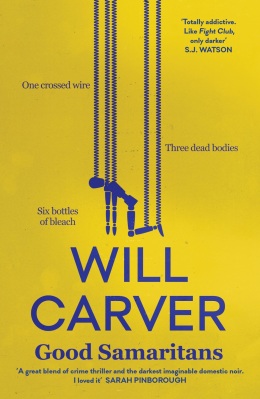 One crossed wire, three dead bodies and six bottles of bleach Seth Beauman can’t sleep. He stays up late, calling strangers from his phonebook, hoping to make a connection, while his wife, Maeve, sleeps upstairs. A crossed wire finds a suicidal Hadley Serf on the phone to Seth, thinking she is talking to The Samaritans.
But a seemingly harmless, late-night hobby turns into something more for Seth and for Hadley, and soon their late-night talks are turning into day-time meet-ups. And then this dysfunctional love story turns into something altogether darker, when Seth brings Hadley home…
And someone is watching…
Dark, sexy, dangerous and wildly readable, Good Samaritans marks the scorching return of one of crime fiction’s most exceptional voices.
My Thoughts
What an amazing read; original, dark and twisted, I couldn’t put it down!
Do you know what is a “Samaritan”? Samaritans is a registered charity aimed at providing emotional support to anyone in emotional distress, struggling to cope, or at risk of suicide throughout the United Kingdom and Ireland, often through their telephone helpline.
The story will go around the Samaritans world, because they should always be nice people and try to help, am I right? So who could be the Good Samaritan? On one side we have Seth Beauman, he suffers from insomnia, and is not happy with his life… but his favourite hobby is calling people from a telephone directory at midnight… He wants to connect, let’s face it, midnight is not the best moment to start calling people…
On the other side we have Ant, he works at the Samaritans helpline, trying to compensate on something he thinks he failed a long time ago… He seems to be the perfect guy, but you know that when someone seem perfect you should be scared.
And in the middle we have Hadley, she starts talking with Seth instead of the Samaritans and starts a connection with him, but when she calls the real Samartians to discover more about him, he will connect with Ant, and this will be the beginning (or the end) of this twisted story.
Because someone is killing people and using on them a lot of bleach to “clear” their impurities and then leave their bodies to be found by a “Good Samaritan”… The main guess is, which is the relation between these bodies and our characters? Of course you’ll have to read the book to know the truth about it!
Some books are made to be read in one stand, this is one of those, because is so dark and original that it will keep you glued till the last page!
Be prepared to laugh, swear and be surprised, this is a twisted story that will be with you forever!
About The Author

Will Carver is the international bestselling author of the January David series (Arrow). He spent his early years in Germany, but returned to the UK at age 11, when his sporting career took off. He turned down a professional rugby contract to study theatre and television at King Alfred’s, Winchester, where he set up a successful theatre company.
He currently runs his own fitness and nutrition company, while working on his next thriller. He lives in Reading with his two children.

One thought on “Good Samaritans by Will Carver – Blog Tour”