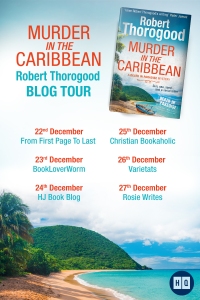 Murder In the Caribbean by Robert Thorogood 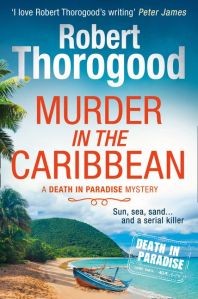 DI Richard Poole is hot, bothered and fed up. He’s stuck on the tropical island of Saint-Marie, forced to live in a rickety old shack on a beach, and there isn’t a decent cup of tea to be found anywhere.
When a boat explodes in the harbour, Richard and his team soon realise there’s a new murderer on the loose. But who is it? And why did the killer leave behind a ruby at the sceneof the crime?

As the police dig deeper, they uncover secrets that go back decades, and a crime from the past that can never be forgiven.
Worse still, they soon realise this is only the beginning. They’ve got to catch the killer before there’s another death in paradise…

It is always refreshing to read a murder with some twisted humour and extravagant characters, it had been as always a pleasure being involved in one of the DI Richard Poole’s investigation, no matter what case he is involved, there will be a cold killer involved and with a little extra of British humour!
This case will involve a murder and robbery to a jewellery 20 years ago, and now the killer has decided to take revenge, the main question will be, will the police stop the killer before he tries to kill again?
I’ve been following Death In Paradise, and of all the police characters involved in it Richard has been always my favourite. The black suit and the tea are always part of his rituals, not matter how hot is the temperature or his sometimes innocence (or ignorance) on how to treat his friends/co-workers make the story funny and interesting.
If you are searching for a whodunnit story, original and addictive, this has to be your next read, I can assure you you’ll not regret it! The only complain I have is that there are only 4 stories in this series and I can’t wait to read the next one! 😉 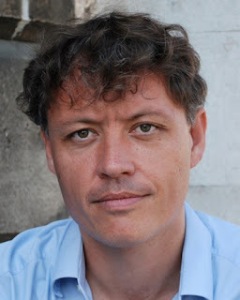 Robert Thorogood is an English screenwriter. He is best known as the creator of the BBC 1 Murder Mystery Series, Death in Paradise.
Robert was educated at Uppingham School in Rutland and read History at Downing College, Cambridge. While at Cambridge, he toured with the university’s student comedy troupe Footlights in 1993 and was elected President in 1994. Soon after leaving Cambridge, Robert set up a theatre company that toured small theatres and schools, the highlight of which was a production of Molière’s The Miser that he directed and acted in alongside Robert Webb, David Mitchell and Olivia Colman.
Robert wrote for many years – selling scripts to the BBC, ITV and independent film companies – but before 2011 the only script of his that was actually broadcast was a Radio 4 afternoon play called From Abstraction about the life of Paul Wolfskehl.
In 2008, Robert entered the inaugural Red Planet Prize and was a chosen finalist, where he was able to pitch his ‘Copper in the Caribbean’ idea to Tony Jordan. By 2011, when the show was finally broadcast – making it Robert’s first TV broadcast credit at the age of 39 – Robert had become something of a poster boy for ‘never giving up on the dream’.