Fade To Grey by John Lincoln 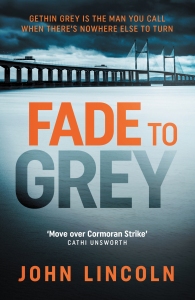 Gethin Grey is the man you call when there’s nowhere else to turn. His Last Resort Legals team investigates miscarriages of justice. But Gethin is running out of options himself: his gambling is out of control, his marriage is falling apart and there’s no money left to pay the wages…
Izma M was sent down years ago for the brutal murder of a young woman. In jail he’s written a bestseller and become a cult hero, and now the charismatic fading-film-star Amelia Laverne wants to bankroll Gethin to prove Izma’s innocence. For Gethin – low on luck and cash – the job is heaven sent. But is Izma M really as blameless as his fans believe?
This seemingly cold case is about to turn very hot indeed…

I totally agree with the title of this book; Fate To Grey, because none of the characters moral is black or white, they all move around greyish; not that I can’t say that almost all humans are on the grey zone, but in this case, it turns deep grey!
This had been a curious read, when Gethin Grey, our main character, is hired to re-open a cold case he thinks he has won the lottery, this would be the case that Last Resort will be starting to get bigger clients and starting to win money. Of course nothing will go as he is expecting and the case will turn into a dangerous case risking the life of all of his associates!
Let’s talk a little about Gethin Grey, because I will admit that I don’t like him much, his moral is grey, doesn’t have any repair to pay money to change the fate of his cases, but on the other side, he takes care of his family and daughter. I would not say that he has a happy family, I will not enter to this argument because I didn’t like either his wife, so let’s say they are draw. Of course the gambling problem is not helping neither… As you can see, is not a likeable character, but one thing is for sure, he always discovers the truth on his cases, even if in the end he turns the balance on his way, he doesn’t stop till he knows all the answers. The author has done an impressive work to show the different Gethin faces, each one greyer than the other, of course, but it makes the book deep and real.
I don’t want to talk much about the case, I don’t want to slip any spoiler, take my word that this is a really interesting and complex case, I loved all the turn outs and mysteries on it, it was a very addictive case! I would recommend it to anyone that loves a good case with a grey detective on it.
I hope that this will not be the only case of Last Resort, I can’t wait to discover a little bit more about all the characters on it and another twisted case like this one!
Ready for a greyish read?

John Lincoln is the transparent pseudonym of John Williams, the novelist, biographer and crime fiction reviewer for the Mail on Sunday. In his twenties John Williams wrote a book called Into The Badlands, about American crime fiction (‘John Williams’ Into the Badlands opened up the world of American crime fiction for me and a generation’ – David Peace). His true crime account of a notorious miscarriage of justice, Bloody Valentine, is a cult classic, described by Benjamin Zephaniah as his favourite book. Since then he’s written eight more books including the Cardiff Trilogy of novels and biographies of Michael X, Eartha Kitt and Dame Shirley Bassey.

One thought on “Fade To Grey by John Lincoln – Blog Tour”