Running in Circles by Claire Gray 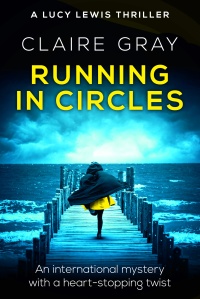 You can’t outrun murder…
When Lucy Lewis landed herself a reporting job on an idyllic Thai island, she thought she’d found paradise.
But one day her dream turns into a nightmare…
A bomb goes off outside her hostel and there is more than one fatality.
Although the local paper she works for is mainly a tourist guide, the phone is soon ringing off the hook with people desperate to hear news of their loved ones.
Together with her editor, Steve Boyd, Lucy finds herself drawn into the investigation.
And things become more complicated when the dead body of someone connected to the paper washes up on the shore.
Was the bomb planted by terrorists? Are the two incidents connected?
Lucy finds herself running in circles as she desperately searches for the key to the mystery…

Lucy Lewis is working in a little newspaper at a Thai Island, she is hiding from her past and trying to take day by day. Everything will change when a bomb will explode near her hostel; she is a journalist, so she is ready to discover who put the bomb and why; sadly, when she starts searching for the truth, she will be involved in another case, this one much more dangerous! Ready?
I liked very much how the story is told, calm and with all the ingredients to make the reader wanting to know more about the characters and their stories; because Lucy will have a partner in this investigation, her boss, Steve Boyd, who is quite disenchanted of life and ready to leave the island and return to his family. We don’t know much about neither the characters, some drops of their past are told during the read, but not all of them, making it more intriguing and attractive to read more about them on another book.
Let’s talk a little about the investigation, because when Lucy and Steve start asking questions about the bombing they will be involved in a murder, they don’t know if the victim was involved in the attack or something different. Let’s say the victim was not loved by his co-workers or any women near him… but who could have a strong motive to kill him? Let me tell a secret, many more people that you would think of!
Reading Running in Circles transported me to a supposed paradise where the human touch broke any type of dream and relax you would think you’ll enjoy!
I really can’t wait to read another adventure of Lucy and Steve, they are quite good partners and they compliment each other on the investigation; and I really want to know more about them!
Ready to “Running in Circles”? 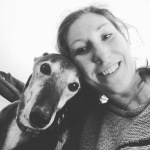 Claire Gray lives in the South Lakes with her husband and two small children. She studied Creative Writing at the Cumbria Institute of the Arts, which no longer exists, having been absorbed by the University of Cumbria. She graduated in 2006 and then went on to complete a journalism course at Darlington College.
That same year, she won a Northern Promise Award from New Writing North, and her work was featured in their anthology, entitled Ten Years On. Claire now works as a freelance copywriter and continues to write short stories, some of which have been published in magazines and online.
Recently, she has been guest editor for the prose section of SpeakEasy Magazine, which showcases Cumbrian writing. In 2015, she received editing advice from The Literary Consultancy through their Free Read scheme. They felt that her manuscript, Running in Circles, showed potential, and began approaching literary professionals on Claire’s behalf.
Sapere Books published Running in Circles in 2019 and Claire is really excited to have published her first novel!