The Family Lie by Jake Cross 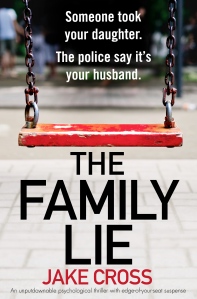 You whispered goodnight to your daughter. You didn’t know that would be your last goodbye.
You wake up in the middle of the night.
Your five-year-old daughter is gone.
Your husband is nowhere to be seen.
Your family think he took her.
The police believe he’s guilty.
But he wouldn’t do that, would he?
He’s a loving father. A loving husband. Isn’t he?

I can not imagine the pain to wake up at night without finding my husband neither my son, it has to be the worst nightmare for any mother, admit it!
Anna wakes up to discover that her husband and her daughter are missing, of course she will call the police, but she will not like the direction of
the police’s investigation, her husband Nick is the author of the kidnapping. And everything will get worse when she will start receiving calls asking for money. They don’t have the money, but her parents do; so which could be the real reason to ask for money?
Since the beginning the police are searching for more information about the parents, like they are suspects too, so the reader is always suspecting there’s something else behind the kidnapping, of course everything will be told in the end, but it will make the reader searching for conspirations during all of the story!
I didn’t trust any of the characters neither (like the police), Anna’s family is a little bit weird and Nick has some secrets too, so is the perfect story to suspect from everyone but without knowing the real reason…
This had been a twisted story; full of secrets and twists that will delight any reader, I can assure you! 😉
Ready for The Family Lie?

Jake has been making stuff up from a real early age. His parents never believed his silly lies when he was young, so he still has no idea why he thought he could invent a decent story as an adult. But he kept trying, and here we are. THE CHOICE is his first novel, the first of three thrillers to be published by Bookouture, and he hopes you like it. If you don’t, he at least hopes you don’t ask for a refund.