Secrets of Santorini by Patricia Wilson 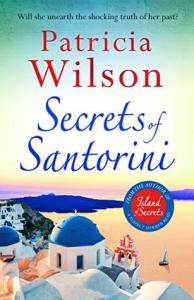 Sent away to convent school at the age of six, Irini McGuire has never really known her celebrated archaeologist mother, Bridget, who lives on the paradise island of Santorini. So, when Irini receives news that Bridget has been injured at a dig and is in coma she knows it is time to return to the island of her birth.
Discovering her mother’s notes, and driven by rumours that her mother’s injury was no accident, Irini starts to reveal the dark secrets behind her family’s separation.
Can she unearth the truth about her parents and her past before it is too late?

This is a book to travel, to let your mind disconnect and flow to the sun and to the mysterious Santorini Island, where the sun and the beach will be enchanted to enter to this mystery.
If you’ve never been to Santorini, thanks to this book you will feel like you’ve been there, walked around the island and felt the sun on your skin.
Day after day, I am discovering that every family has a dark side, tried to hide from everyone, but in the end it always goes out, no matter how hard they tried to keep it hidden, the truth always comes out.
Irini and Bridget’s relation has never been easy (I am sure that not all the mother/daughter relations are easy) but in this case, their relation is so estranged that she feels like they are strangers. So when Irini discovers that maybe the accident that has put her mother at the hospital has not been an accident, she will be compelled to discover what has really happened. Will she be able to discover the truth before it is too late?
Be prepared for a mysterious book, with dark secrets and hidden truths. Ready? 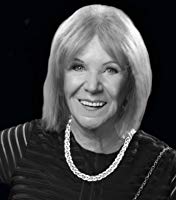 After running her own business for twenty years, Patricia took early retirement and moved to the Greek island of Crete.
When she dug up a rusted machine gun in her garden, and the inhabitants of her remote mountain village came with local stories of tragedy and triumph, she knew she had to tell their account of what really happened in September 1943. In 2017, Patricia’s first novel, ISLAND OF SECRETS, quickly became an Amazon number one best seller.
Patricia, who enjoys painting and photography when she’s not writing, now lives on the island of Rhodes where she discovered another story of injustice while researching and writing her second novel. VILLA OF SECRETS is published by Bonnier Zaffre, and the paperback hits the shelves in all good supermarkets, airports, libraries, and bookshops on the 3rd May 2018. Amazon have already awarded VILLA OF SECRETS a best seller flag. For Patricia, the most moving part of writing VILLA OF SECRETS was listening to a survivor of Auschwitz tell of his removal from Rhodes. ‘This young teenager’s journey to the concentration camp, and how he managed to survive and return ten months later, nothing but 22 kilos of skin and bone, was absolutely heartbreaking.