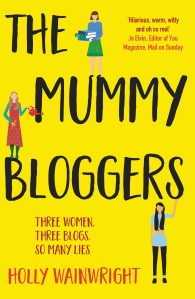 Sometimes life behind the screen is not as rosy as it seems…
Meet three Mummy Bloggers – each of them followed, idolised, imitated, taunted and trolled online.
Elle Campbell is a glossy, lycra-clad mum with washboard abs, a ten-year plan and a secret past. Abi Black has quit sugar, moved to the country and is homeschooling her kids. Leisel Adams slogs away at her office job each day before rushing home, steeped in guilt, to spend precious moments with her kids before bedtime.
When all three women are nominated for a prestigious blogging award with a hefty cash prize, the scene is set for a brutal and often hilarious battle for hearts, minds-and clicks. As the awards night gets closer, their lies get bigger, their stunts get crazier – and some mistakes from the past become harder and harder to hide.

This had been more than a chic lit story; with humour but real truths Holly Wainwright had written a delightful read; the dark side of bloggers!
This is the story of Abi, Elle and Leisel; about their real lives compared to their blogger ones; the real side of themselves to the fantasy one they shared with the followers. Everything will get out of control until all of them are selected for the biggest award; their rivalries will get out of control, making them do the unthinkable to win… So the question would be, what would you be able to do to win fame?
I know that the blogger world is all about perspective and what you share to the world; but what you see is not always the real side of the people behind the blog. I don’t think lying is what all the influencers do in their blogs; but let’s face it, drinking champagne all the time is neither! There are real people blogging with their ups and downs, but prefer to share their ups instead of their downs; and to say the truth who doesn’t? I know the blogger world has been questioned a lot lately and this book doesn’t help much to have a good view of the bloggers; but don’t forget that this is a fiction book; and bloggers are persons with the right to do wrong too!
I think that’s the point of “The Mummy Bloggers”, to show the pressure the influencers have; to be perfect and never loose or deceit any of their followers. Not a live I would recommend to anyone.
If you are looking for a refreshing story with a few surprises, this one is for you. Enjoy!

Originally from Manchester, Holly lives in Sydney, Australia. She is a journalist and editor, originally working in travel and celebrity magazines and now online as Head of Entertainment at Mamamia. Holly hosts a parenting podcast and has two small children.

One thought on “The Mummy Bloggers by Holly Wainwright – Blog Tour”