The Alphabet Murders by Lars Schutz 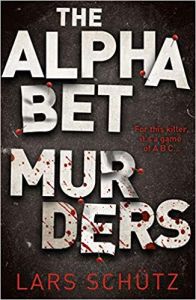 Criminal profilers Jan Grall and Rabea Wyler are assigned the gruesome case of a man found murdered in a wildlife park. Later, two more bodies are found, both
brutally mutilated, and authorities soon realise that the victims are linked by the letters of the alphabet tattooed on their skin.
Then the killer strikes again and Grall and Wyler receive a mysterious package containing a blood-encrusted scrap of skin marked with a letter. And when Grall’s
hotel room is marked with a Z, the race is on to find out who this vicious killer is.
Before it’s too late…

This is a very personal case for the criminal profiler Jan Grall, he has to return to his home after a long absence to investigate a serial killer who tattoos letters to his victims. Who could be the Alphabet killer?
I was glued to this story since the beginning, Jan seems a cold man but cares for the people he loves and possibly is the best profiler to look into this case! But we can’t forgive his partner Rabea Wyler, a young brave woman that respects Jan but has her own opinions too!
I would like to think that this will not be the only case we will read of Jan Grall, I started to care for him, he seemed cold and uncaring in the beginning but there are so many touching moments and situations that I think he hides it from everyone to being able to stay calm on the pressure moments.
The case is interesting and with a few surprising twists, I don’t think the readers will discover them before it’s too late! But this is the good thing of a good book, that it will surprise you, am I right?
The story is told between the investigation of the case (with the profilers and the detectives) and the thoughts of one of the victims of the killer, who is still alive and hopes that will be rescued before it’s too late.
This is a good thriller, suspenseful and gripping! Ready to discover The Alphabet Murders?

Lars Schütz was born in 1992. He works as a copywriter for a large advertising agency in Düsseldorf. The Alphabet Murders is his debut thriller.

One thought on “The Alphabet Murders by Lars Schutz – Blog Tour”