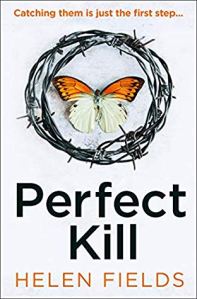 About The Book Alone, trapped in the darkness and with no way out, Bart Campbell knows that his chances of being found alive are slim. Drugged and kidnapped, the realisation soon dawns that he’s been locked inside a shipping container far from his Edinburgh home. But what Bart doesn’t yet know is that he’s now heading for France where his unspeakable fate is already sealed… DCI Ava Turner and DI Luc Callanach are working on separate cases that soon collide as it becomes clear that the men and women being shipped to France are being traded for women trafficked into Scotland. With so many lives at stake, they face an impossible task – but there’s no option of failure when Bart and so many others will soon be dead…

When the body of a young man appears without organs inside, the police is not sure what they are looking for, only that something really bad is happening! This is a story told between different characters and two different countries: UK and France, but don’t worry you’ll be able to follow the story all the time. Is very detailed and interesting, but don’t expect an easy case. There will be rape, abuse, malpractice and difficult situations, but this had been a very interesting and gripping thriller. The main characters, the police detectives in their own countries are fearless and intelligent, fighting for the truth and safe for everyone. I really liked how the author, Helen Fields, has created an extensive background for both characters, connection and feelings; it’s clear that this is not their first case together, but you’ll not feel lost at all during the story. Just to let you know, this is the sixth book in the D.I. Callanach series, but you can start the series it on this one, I can assure you! ‘ll admit that a few situations of the book are difficult to read, they are detailed and the reader could almost feel the pain and fear on their own skin. In the end you’ll feel angry and enraged on society. Is there really people ready to do anything for money? Killing or trying to kill only for power? I am so sad when I read these type of books! Not for the story but because reality as I always says is worst than fiction… But at the same time, the only way to fight the worst type of evil is fighting it, helping the police always. I enjoyed this case, the race agains the clock, the rollercoaster emotions of the characters and the insight of a police case, addictive and non-stop, this is a book you don’t want to miss. Ready for the Perfect Kill?

An international and Amazon #1 best-selling author, Helen is a former criminal and family law barrister. Every book in the Callanach series claimed an Amazon #1 bestseller flag. Her next book, the sixth in the series, ‘Perfect Kill’ is due out on 6 February 2020. Helen also writes as HS Chandler, and last year released legal thriller ‘Degrees of Guilt’. Her previous audio book ‘Perfect Crime’ knocked Michelle Obama off the #1 spot. Translated into 15 languages, and also selling in the USA, Canada & Australasia, Helen’s books have won global recognition. Her first historical thriller ‘These Lost & Broken Things’ comes out in May 2020. A further standalone thriller published by HarperColllins will come soon. She currently commutes between Hampshire, Scotland and California, where she lives with her husband and three children.