Never Look by Back AL Gaylin 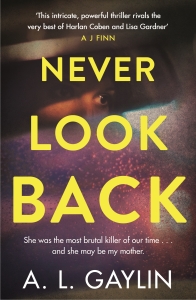 When website columnist Robin Diamond is contacted by true crime podcast producer Quentin Garrison, she assumes it’s a business matter. It’s not. Quentin’s podcast, Closure, focuses on a series of murders in the 1970s, committed by teen couple April Cooper and Gabriel LeRoy. It seems that Quentin has reason to believe Robin’s own mother may be intimately connected with the killings.
Robin thinks Quentin’s claim is absurd. But is it? The more she researches the Cooper/LeRoy murders herself, the more disturbed she becomes by what she finds. Living just a few blocks from her, Robin’s beloved parents are the one absolute she’s always been able to rely upon, especially now amid rising doubts about her husband and frequent threats from internet trolls. Robin knows her mother better than anyone.
But then her parents are brutally attacked, and Robin realises she doesn’t know the truth at all…

What an original and twisted story, I was so glued to the plot that I was all day attached to my earphones!
The story is based in an old crime, how it affected the victim’s families and is told like a podcast by one descendant of the victims. You may be asking why they make this post now and the answer is that Quentin (a familiar of one of the victims) needs closure, knowing why they killed so many innocent people. His life has always been grey, with a drug addict mother and an angry grandfather, now he needs to know why. Everything will get more exciting when Quentin received a call saying that one of the killers was still alive!
Quentin is a sad and angry man, so he starts creating “Closure” to make peace with his family, in particular his mother. He thinks all his childhood was a mess thanks to the murders in the 1970’s, when his aunt died. But there’s much more behind the characters and their story when he starts investigating, he doesn’t know how to handle the truth… I really don’t want to explain too much about the story, there are some twists and mysteries that are better if you discover them while you are enjoying this audio book, don’t you think?
I listened to this story, told between different characters and different voices makes the story like a real podcast, I would love to “listen” to another one! The story is complex with so many layers and interlinks between the characters that in the end you’ll be surprised of how “fate” is much more unpredictable than we think!
I really loved this story, I am recommending it to anyone who loves to read/listen books, it’s a must for this year, believe me!

Alison Gaylin’s debut book was nominated for an Edgar Award in the Best First Novel category. A graduate of Northwestern University and Columbia University’s Graduate School of Journalism, Alison lives with her husband and daughter in upstate New York.