The Secrets of Sunshine by Phaedra Patrick 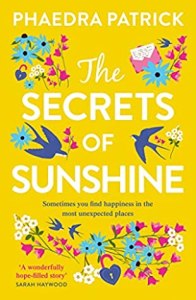 A single father gets an unexpected second chance at love in the heart-warming new novel from the bestselling author of The Library of Lost and Found.
Only his daughter Poppy knows that behind his prickly exterior, Mitchell Fisher is deeply lonely. He may have sworn off romance, relishing his job cutting off the padlocks that couples fasten to his hometown’s famous ‘love story’ bridge… but underneath it all, he’s still grieving the loss of Poppy’s mum.
Then one hot summer’s day, everything changes when Mitchell bravely rescues a woman who falls from the bridge into the river. He’s surprised to feel an unexpected connection to her, but then she disappears. Desperate to find the mysterious woman, Mitchell teams up with her spirited sister Liza to see if she’s left any clues behind. There’s just one – a secret message on the padlock she left on love story bridge…

A sweet and charming story to keep your heart warm any day you need!
I really liked this story, it’s beautiful, charming and full of tenderness; it has romance, yes, but the story is more focused on friendship, acceptance and change between all the characters. The main character, Mitchell Fisher, is not looking for love, he seems to have an ok life with her daughter; but everything will change when she will rescue a mysterious woman in the bridge, the deep connection between them makes him start looking for her and maybe for something more.
I don’t know which character I cherished more from this story; how Mitchell starts to look different at his life, or how his daughter Poppy loves him knowing that he is not as happy as he says. Or Liza, Mitchell sister’s, who will help him find the mysterious woman simply because she wants him happy. I liked the family connection that all the characters have, they know they are not perfect, but they love each other and that’s what matters the most.
I think this is a book that anyone will love to read; sharing that you can find love/friendship in the least expected moment and that if you really want something and fight for it, there’s a strong chance that you’ll find it.
The Secrets of Sunshine is a beautiful book that let a smile on my face during these grey days, so it’s worth every page!

Phaedra Patrick studied art and marketing and has worked as a stained glass artist, film festival organiser and communications manager. An award-winning short story writer, she now writes full time in Saddleworth where she lives with her family.
Her debut novel, The Curious Charms of Arthur Pepper, was translated into over twenty languages worldwide and has been optioned by a major Hollywood film studio. Her second novel, Rise and Shine, Benedict Stone (named Wishes Under the Willow Tree in the UK), is also under option in the US as a TV movie. Her third novel is The Library of Lost and Found, and the fourth one is titled The Secrets of Love Story Bridge (The Secrets of Sunshine in the UK).