Ready to discover another great book for this 2020? Take a look… 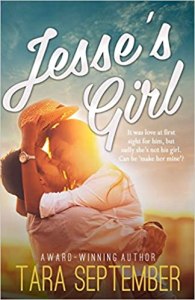 “I wish that I had Jesse’s Girl”*
Successful Texas lawyer, Reade Walker, curses that damn song every time it plays, all too aware of the irony of its lyrics. After all, he has been secretly and painfully enamored with Jesse’s girl, Gwen, for nearly a decade. It was love at first sight for him, but sadly she’s not his girl. She belongs to the one man who betrayed him and knows Reade’s hidden family secret. Yet Reade can’t seem to love anyone except the one woman he can't have. Or can he make her mine?
When Gwen Clark’s senator husband runs off with his intern and all their money, the ensuing scandal turns her life upside down. Deserted, penniless and desperate to provide for her six-year-old daughter, Gwen has no one to turn to but Reade Walker. The one man her heart desperately wants, but her pride dreads having to ask for help. Despite welcoming them into his home, it seems like Reade can barely stand being in the same room with her anymore, let alone under the same roof—in the same bedroom. But Gwen is determined to get her life back on track. It is past time to rediscover her own dreams…if only she can keep her aching heart from breaking all over again.

What the hell had she been thinking? Gwen Gallo Clark hadn’t been, obviously.
It would only have taken a few measly seconds to reach up on her tiptoes to look through the peephole before opening the oversized front door. Maybe then she would have been better prepared. Not that she could possibly have prepared herself for the sight of over a dozen reporters elbowing each other as they surged toward her. She wiped the sweat from her palms on her pants and prepared for the worst.
Thank goodness Maddie isn’t home. Her daughter would have been terrified by the mob that confronted her at their door. Luckily, Gwen had just dropped her off at school.
She flinched from a particularly blinding flash of light from an expensive-looking camera with a lens so long you’d think the man was photographing Mars. Black and yellow spots appeared along the corners of her vision. Bringing her hand up she lowered her head to shield her eyes from the blaring lights. Being in the public eye was part of being a politician’s wife— one of the things that Gwen detested. However, the press had never shown up at her home unscheduled or uninvited. And why were they looking for her husband, the Senator, here at his Texas residence and not at his offices or apartment in Washington, D.C.?
Pushing her anxiety aside, Gwen straightened and tried to look as composed as possible while standing there ill-equipped and barefoot, listening to the barrage of questions being thrown her way.
“Sorry, but one at a time please,” she called out firmly to the crowd. “If you’re looking to speak with my husband, he isn’t here.”
Her statement caused several of the journalists to laugh. One reporter quipped, “Yeah, we gathered as much, ‘mom.’” Looking pointedly down at her chest, he aimed his camera and snapped a photo, which created even more snickering amongst the gathering.
Following the direction of his eyes, Gwen blushed at the reminder of what she wore. Black yoga pants paired with a loose gray T-shirt with scripted letters that read, “The World’s Okayest Mom.” She’d thought the self-deprecating shirt was rather funny, but not so much at the moment with microphones being shoved in her face.
Clenching her clammy fists, a sick feeling washed over her. Scanning the hostile group, she locked eyes with a friendly tabloid reporter she knew from her journalism school days and smiled. The woman’s pitying look stopped her breath and for a moment, the spots in front of her eyes were back, nausea churning in her gut.
Those first terrifying moments of shock having passed, the reporters’ words began to seep in.
“Mrs. Clark, would you care to comment on the allegations that Senator Clark has been having an affair with his intern?”
“Did you know about their embezzlement from the Literacy Foundation?” 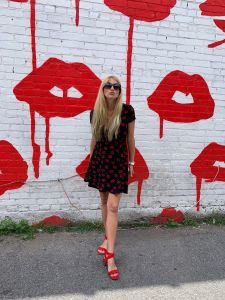 Blogger and former PR executive for The Walt Disney Company, Tara holds a Master’s degree in journalism & communications from New York University. She also spent a semester abroad during her undergrad at Queen Mary University in London. For over a decade before publishing, Tara has penned a popular lifestyle, travel and parenting blog at TaraMetBlog.com.
Always an avid romance reader, she has been daydreaming about being an author since school. Dozens of bad dates, four cities and adventures later, she still finds it impossible that she met her husband on a New York City subway. They now live in sunny Florida with identical twin boys and four cats underfoot/on her laptop/everywhere. Fueled by an IV of green tea and sometimes Champagne, she’s finally writing the happily ever after tales she’s been dreaming about.

One thought on “Jesse’s Girl by Tara September – Blog Tour”