Manor On The Moor by Liz Taylorson 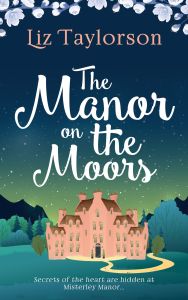 Alice has landed her dream job, searching the Misterley Manor archives for tales of the elusive Gilbert Fox-Travers – life should be perfect, if only she could untangle her complicated love life…
Caroline is desperately trying to keep Misterley from falling down around her ears, and it’s a tough enough job without throwing a stroppy teenager, a difficult ex-husband and a cantankerous father into the mix.
When disaster strikes, Caroline and her family must pull together to save her beloved family home…Can Alice uncover the mystery of Gilbert Fox-Travers in time to save the Manor?

Do you like mysteries? Because Manor On The Moor is a mystery wrapped in a romance story; full of humour, love and secrets… ready?
I was surprised by this story, the characters are full of personality and insecurities, like everyone, so you’ll find attracted to the characters and the story. But they will have to face their faults if they want to change the path of their life and discover the truth about the Misterley Manor.
Alice is a nice character that makes you want to help her, she is not lucky from the love side, but she is decided to discover the truth of the famour Gilbert Fox-Travers. She will need a lot of help in her search, but don’t be afraid, she will have the help of a handsome gardener… and a pompous boyfriend! You could guess who will win her heart? 😉
Caroline is in charge of the Misterley Manor, and she has so many things to take care that when “bad things” start to happen to her life, she doesn’t know how to take a step back and see how to repair all the damage… But don’t worry, she is quite an interesting woman and she will have some unwanted help to, from “That Man”, oh yes, her ex-husband!
Yes, the mystery of the Manor is an important part of the book, but I liked much more the characters and how they changed during the book, by improving and making you to fall in love with their story!
Just let the Manor enter to your heart.

Liz has always surrounded herself with books.
As a child, she was always to be found with her head in one and she still has a bookcase full of her childhood favourites to this day. (As a thirteen-year-old she read The Lord of the Rings twelve times in a row, cover to cover!) All this reading led, unsurprisingly, to a degree in English Literature, (and another book-case full of books) and then a job as a cataloguer of early printed books for a major university library. This meant spending hours sitting in a beautiful, ancient building looking at antique leather-bound tomes – although as so many of them turned out to be rather boring volumes of sermons she wasn’t tempted to
read them! She went on to train others to catalogue books and her earliest attempts at writing anything as an adult consisted of instructions on how to work out the correct form of an author’s name to use in a library catalogue.
Children (and then cats and chickens) interrupted her bibliographic career, and having given up library work Liz found herself doing more reading, and increasingly she found herself enjoying novels by writers like Trisha Ashley, Katie Fforde, Milly Johnson and Lucy Diamond. Inspired by their example, she started writing fiction and hasn’t stopped since, joining the Romantic Novelists’ Association’s wonderful New Writers’ Scheme to try to learn how to write novels properly in 2015. She has also attempted writing some short stories, with one The Second Princess winning a competition in Writing Magazine which led
her to think that maybe publication wasn’t a pipe dream after all.
Liz owes everything to her tolerant and long-suffering husband Ben and her tolerant and long-suffering children, but very little to the cats who are neither tolerant nor long-suffering and keep sitting on the computer keyboard and messing up her manuscript if she forgets to feed them on time.
When not reading or writing Liz is often to be found on stage (or behind it) with her local amateur dramatic society, drinking tea, or visiting one of the several North Yorkshire seaside villages which were the inspiration for the fictional Rawscar, the setting for her debut novel The Little Church by the Sea.

Today in my blog I am reviewing "Sisterhood" by V.B. Grey.
Today I am reviewing "Keep Me Close" by Jane Holland in my blog.
Today on my blog I am playing and getting dirty with the "Kuretake Karappo Pen". If you are curious, take a look!
When yesterday I saw that this book was published I couldn't wait to buy it for my son.
I am reading "The Shadowing" by Rhiannon Ward for my blog tour post at the end of the month, and I am loving it!
Sometimes us, the parents, buy big toys for the children to play; while they prefer something simple and cheaper!