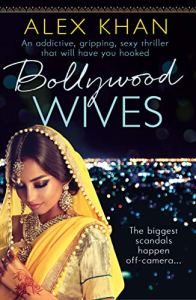 Zara Das is Bollywood’s hottest property, her every move watched by the eyes of the press. Riding high from the success of a string of blockbusters, she has the world at her feet, but the scandal from her latest film threatens to dethrone her as Bollywood’s reigning queen.
So when superstar director Raj Dillon stages a lavish retelling of Pride and Prejudice, moving the shoot from Mumbai’s soundstages to London, Zara knows this is the role that could put her back on top. Coming with them are the Bollywood Wives – Jackie, Sasha, and Rani – bringing their own off-screen drama.
But behind the diamonds, designer clothes and seven-star hotels lies the truth of how Zara reached the top. And when a dead body is found in her hotel room, it seems that someone is determined to take Zara down – and will stop at nothing to expose her darkest secrets.
Zara has spent years running from her past. But now it’s caught up with her…

This is a great story told around the life of the Bollywood stars, how they have succeeded and what are they capable to do to maintain their popularity, maybe killing, lying and manipulating? Ready for a fast trip to the glamorous world?
I can not say that this is the type of books I read, but it intrigued me discovering a little bit of the Bollywood world and their backstage, their dreams and their hopes; it had been a surprising and tumultuous read, because not all the stars shine…
This is the story of Zara and all the crew that will accompany her to the new Bollywood movie; someone is trying to scare her and attempt on her life; but she is not ready to hide, she wants the world to accept her and maintain her diva status. The only problem is that she is starting to feel the pressure of being a cold diva so maybe it will be the moment to change and to start trusting other people…
The story is not only based on Zara’s life but all the other women surrounding her, their stories and problems. I don’t want to tell much about them, it’s more interesting if you read their story!
I was quite surprised how the author explains the Indian society, very classical and close minded, but all the characters on the book are females trying to break the chains their life had been keeping them.
This had been a feminist read, on how women are kept behind their husbands/fathers/men in their life, and how is it on our hands to change our path, where women are ready to follow their dreams instead of keeping quiet. I know lately this is a theme that is in everybody’s talks, but, I think that if we don’t talk about it there will never be a big change!
Ready to discover the dark and light side of Bollywood?

Alex Khan is the pseudonym of Alex Caan, whose Riley and Harris police procedural series for Bonnier reached number 1 in the digital bestseller charts, with Cut to the Bone being chosen as a WHS Smith Book of the Week.
Bollywood Wives is the book that Alex has always wanted to write – a sweeping, blockbuster novel set in the luxurious world of Bollywood.
One of Hera Books’ missions is to publish fiction from BAME voices with real commercial, crossover appeal. In this novel classic Jackie Collins meets the best of Bollywood in an escapist, engrossing and sexy novel that will appeal to all readers of
commercial fiction.