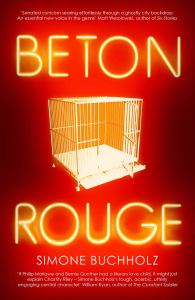 On a warm September morning, an unconscious man is found in a cage at the entrance to the offices of one of the biggest German magazines. Closer inspection shows he is a manager of the company, and he’s been tortured.
Three days later, another manager appears in similar circumstances.
Chastity Riley and her new colleague Ivo Stepanovic are tasked with uncovering the truth behind the attacks, an investigation that goes far beyond the revenge they first suspect … to the dubious past shared by both victims.
Travelling to the south of Germany, they step into the hothouse world of boarding schools, where secrets are currency, and monsters are bred…monsters who will stop at nothing to protect themselves.
A smart, dark, probing thriller, full of all the hard-boiled poetry and acerbic wit of the very best noir, Beton Rouge is both a classic whodunit and a scintillating expose of society, by one of the most exciting names in crime fiction.

Chastity Riley is a Public Prosecutor and a quite interesting character, she is quite good on her job when she is not with a hangover of course. She has a quite interesting social life and friends… you’ll see.
Let’s talk about the case, because can you imagine finding a man inside a cage? Your worst nightmare I am sure, but the reality of two men, that work at the same place and had some past together… Chastity will have to discover what is threatening them; their past or their work… I will simply say that none of them is loved by their co-workers.
This had been a really quick read, the chapters are really short and with quite original names on them. It was like eating pop-corns, just one more…!
This is the second case of Chastity Riley and I will have to admit that I felt a little lost with some of the characters connections, some actions and situations affected more Chastity than I would had guessed, so I suppose there’s something more that I was missing. But it will not affect the case at all, and let me say that is really twisted!
Don’t doubt that I’ll follow Chastity on her next case, she is bold and interesting, and her cases will leave no one indifferent!
Ready to enter the cage?

Simone Buchholz was born in Hanau in 1972. At university, she studied Philosophy and Literature, worked as a waitress and a columnist, and trained to be a journalist at the prestigious Henri-Nannen-School in Hamburg. In 2016, Simone Buchholz was awarded the Crime Cologne Award as well as runner-up in the German Crime Fiction Prize for Blue Night, which was number one on the KrimiZEIT Best of Crime List for months. She lives in Sankt Pauli, in the heart of Hamburg, with her husband and son.

One thought on “Beton Rouge by Simone Buchholz – Blog Tour”