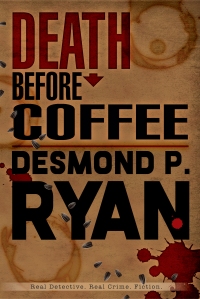 By 2:27 on a Thursday afternoon, the one-legged man from Room 8 at 147 Loxitor Avenue has been beaten to death with a lead pipe. Twenty-eight minutes later, Detective Mike O’Shea is testifying in a stuffy courtroom, unaware that, within an hour, he will be standing in an alleyway littered with beer cans and condoms while his new partner—the man who saved his life thirteen years ago—flicks bugs off of a battered corpse with a ballpoint pen. When a rogue undercover copper prematurely hauls in the prime suspect, Mike blows a fuse, resulting in an unlikely rapport developing between him and the lead homicide detective sergeant, a woman known for her stilettos and razor sharp investigative skills. At the end of his seventy-two-hour shift, three men are dead and Mike O’Shea is floating in and out of consciousness in an emergency room hallway, two women by his side.
Death Before Coffee, the second book in the Mike O’Shea Crime Fiction Series, weaves a homicide investigation through the life of an inner-city police detective intent on balancing his responsibilities as a son, brother, and newly single father with his sworn oath of duty. When faced with death, Mike is forced to make decisions that stir up old memories, compelling him to confront his demons while fighting the good fight.

For almost thirty years, Desmond P. Ryan worked as a cop in the back alleys, poorly-lit laneways, and forgotten neighbourhoods in Toronto, the city where he grew up. Murder often most unkind, assaults on a level that defied humanity, and sexual violations intended to demean, shame, and haunt the victims were all in a day’s work. Days, evenings, midnights–all the same. Crime knows no time.
Whether as a beat cop or a plainclothes detective, Desmond dealt with good people who did bad things and bad people who followed their instincts. And now, as a retired detective, he writes crime fiction.
Real Detective. Real Crime. Fiction.