The Time of Our Lives by Portia Macintosh 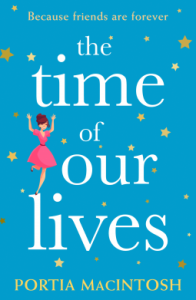 Love is in the air…?
Luca is used to being the ‘single one’ at weddings – it happens, when all your other friends are engaged, married or taken. But when she bumps into Tom, her friend from university who broke her heart into a million pieces, she finds herself wondering what could have been.
It’s ten years later, surely she should be over that Tom by now? So why is he looking even more gorgeous than ever – and why doesn’t he seem to be able to keep his eyes off her either?
And as the champagne flows and old secrets resurface, Luca realises that perhaps the time to take a chance on love and life is…now?

This had been a quick read, with funny scenes, witty dialogue and weird coincidences! Perfect for anyone who wants to have the time of our live!
I already know that Portia Macintosh books are always refreshing and leave a smile on your face, this case is not an exception, but maybe the smile is much bigger than any previous book!
We will start this book following Luca who is going to a wedding, a wedding she doesn’t want to go, but know that she can not miss… one of her old friends from Uni is marrying, this means that she will reunite with all her old friends and she will have to remember how her heart was broken in a thousand pieces. What she doesn’t expect is to meet again the guilty person who broke her heart, will the feelings return?
Luca will not have the time of her live, as you can expect; she will meet with the ex-boyfriend Alan (now called Al Atlantic), the guy who broke her heart (Nathan) and an interesting new guy, maybe the love of her life? (Ed) But don’t expect to only read Luca’s love life, you’ll meet all her old friends too; and they are quite a group, don’t doubt it!
The story will be told between the present (the wedding) and some memories of the group from the past; Luca’s friends are special, they all have their faults, and some of their worst moments will be remembered during the wedding, but who didn’t do anything wrong during Uni? You’ll have to read The Time of Our Lives if you want to know some of the moments!
I liked how all the characters at the end of the story try to connect all their faults, like trying to justify that everything that they did in the past was to be in this special moment in the present. Maybe is true maybe not, but now I have a happy face remembering the book, so I prefer to think that is true! 😉

Portia MacIntosh has been ‘making stuff up’ for as long as she can remember – or so she says. Whether it was blaming her siblings for that broken vase when she was growing up, blagging her way backstage during her rock chick phase or, most recently, whatever justification she can fabricate to explain away those
lunchtime cocktails, Portia just loves telling tales.
After years working as a music journalist, Portia decided it was time to use her powers for good and started writing novels instead.
Bestseller Portia writes hilarious romcoms, drawing on her real life experiences to show what it’s really like being a woman today – especially one who doesn’t
quite have her life together yet.