Kate Collins has been ghosted.
She was supposed to be moving in with her new boyfriend Scott, but all she finds after relocating to Brighton is an empty flat. Scott has vanished. His possessions have all disappeared.
Except for his mobile phone.
Kate knows she shouldn’t hack into Scott’s phone. She shouldn’t look at his Tinder, his calls, his social media. But she can’t quite help herself.
That’s when the trouble starts. Strange, whispering phone calls from numbers she doesn’t recognise. Scratch marks on the walls that she can’t explain.
And the growing feeling that she’s being watched . . .

Ghoster: a person who ends a relationship with someone by suddenly and without explanation withdrawing from all communication.

I’ve just discovered this new word, Ghoster, a few months ago and I’ll admit it adds a new perspective at the relationship world. Because if the failure in a relationship is not enough, now you have to be careful to not being ghosted! Can you imagine?
This is a mixture of psychological thriller and horror story in a real perspective that will make you wonder what has really happened!
Kate is totally in love with Scott, so blindly in love, that when Scott asks her to move in after a few months together she accepts it without doubt. And that’s when the things will start turning south… because 24 hours before the move in, Scott stops answering her texts and calls. But Kate decide to continue with the moving and when she arrives at what it would had been her new life, all the Scott possessions had disappeared and it only remains his mobile… Oh yes, that’s when it gets scary, with some creepy phone calls and weird marks at the door; and the feeling that someone is watching her, making her start doubting of her own sanity! Because she has seen a lot of deaths (she works in a hospital) but she has never believed in ghosts till now. Kate will be so scared that her best friend will try to help her, showing us the power and trust of friendship.
The story is told in present, but we will read some flashbacks of how the relation between Kate and Scott begins, making it more easily to engage and understand their relation. Because the story of Kate and her addiction to them it will be talked in the book and possibly it will make you re-think how attracted you are too to technology.
This had been a very different read, mixing genres and original plot, it’s perfect if you are looking for a non-sleepy night!
Ready for Ghoster? 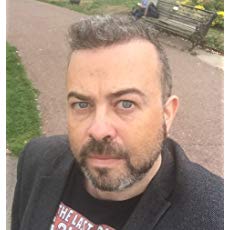 Jason Arnopp is the author of the new Orbit Books novel Ghoster, which Barnes & Noble’s SFF blog has said, “just might qualify as the first true horror novel of the 21st Century.” The Three author Sarah Lotz calls it, “a fiendishly smart exploration of obsession and social media addiction”, while Cross Her Heat author Sarah Pinborough reckons it’s, “twisty, creepy and utterly absorbing.”
Arnopp’s previous novel was The Last Days Of Jack Sparks (2016), which has been described as “a magnificent millennial nightmare” (Alan Moore), “scarier than watching The Exorcist in an abandoned asylum” (Sarah Lotz) and “The Omen for the social media age” (Christopher Brookmyre). Director Ron Howard (Apollo 13, Frost/Nixon, The Da Vinci Code) optioned the film rights shortly after the book’s 2016 release.
Arnopp co-wrote the official behind-the-scenes book Inside Black Mirror with Charlie Brooker and Annabel Jones.