The Aosawa Murders by Riku Onda 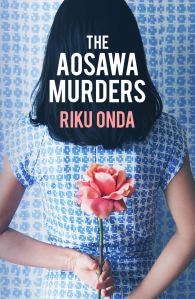 On a stormy summer day in the 1970s the Aosawas, owners of a prominent local hospital, host a large birthday party in their villa on the Sea of Japan. The occasion turns into tragedy when 17 people die from cyanide in their drinks. The only surviving links to what might have happened are a cryptic verse that could be the killer’s, and the physician’s bewitching blind daughter, Hisako, the only family member spared death. The youth who emerges as the prime suspect commits suicide that October, effectively sealing his guilt while consigning his motives to mystery. Inspector Teru is convinced that Hisako had a role in the crime, as are many in the town, including the author of a bestselling book about the murders written a decade after the incident. The truth is revealed through a skillful juggling of testimony by different voices: family members, witnesses and neighbors, police investigators and of course the mesmerizing Hisako herself.

Reading a Japanese book is like entering to another world, everything is told with a beautiful and peaceful prose, no matter if you are reading a romance or a crime book, the story will always leave an imprint on you.
I always feel that when a story is told between different perspectives it makes the story more realistic, this book will share the story of 11 people, through their emotions and thoughts previously and during the most horrifying case ever seen, how 17 people died from Cyanide Poisoning and only 2 survive, of course they will be the main suspects. In this story the whom and the why is not really what matters but the people involved during the success and their lives.
It’s not my first Japanese book, so I know that their prose is different as the European/American, less direct, more about emotions and feelings, but I was surprised the way it makes this crime book more frightening and dark than any other book.
The Aosawa Murders is a “typical” case of whodunnit, but it really isn’t typical, because even if we read the perspectives of the people who were killed, by using the clues the reader could try to solve the case. The author will not solve the case for you, so you’ll have to decide how do you want to end this original story.
I really enjoyed this read, it was a little bit difficult in the beginning discerning the relation between the characters, but this is what made this book different and interesting at the same time! It was an amazing trip to Japan and with the beautiful cover, this is a hit! 😉

Riku Onda, born in 1964, is the professional name of Nanae Kumagai. She has been writing fiction since 1991 and has won the Yoshikawa Eiji Prize for New Writers, the Japan Booksellers’ Award, the Mystery Writers of Japan Award for Best Novel for The Aosawa Murders, the Yamamoto Shūgorō Prize, and the Naoki Prize. Her work has been adapted for film and television. This is her first crime novel and the first time she is translated into English.
Alison Watts is an Australian-born Japanese to English translator and long time resident of Japan. She has translated Aya Goda’s TAO: On the Road and On the Run in Outlaw China (Portobello, 2007) and Durian Sukegawa’s Sweet Bean Paste (Oneworld Publications, 2017), and her translations of The Aosawa Murders and Spark (Pushkin Press, 2020) by Naoki Matayaoshi are forthcoming.

One thought on “The Aosawa Murders by Riku Onda – Blog Tour”