The Patient Man by Joy Ellis 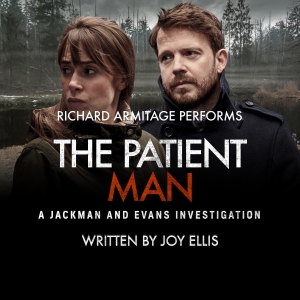 The Patient Man opens with a series of seemingly random crimes in the town of Saltern-le-Fen – firearms taken from the head of the Fenside Gun Club, fuel stolen from a farm, six pigs and a horse carried off in the night – landing on the desk of DI Rowan Jackman and DS Marie Evans. No-one is too concerned – until a sniper executes a man with a clean shot to the head in broad daylight.
When a second victim is killed in as many days, Jackman detects the hand of his nemesis Alistair Ashcroft, the wanted killer who haunts his thoughts. Somewhere out there, Ashcroft is biding his time, waiting to strike them again. He said he would return – and when Evans receives a message with the warning Lest we forget, it is clear it could be sooner rather than later.
Who is behind the deaths? To uncover the truth and keep his team from harm, Jackman must travel into the mind of the notorious killer. Having executed his murderous crusade, Ashcroft wants to indulge himself, unleashing a game of cat and mouse whose stakes could be no higher. In the struggle between a man who cares too much and a man who cares for nothing, the former is bound to lose. Let the fun begin.

This is a slow burning story with an old rival of our main characters: Detective Inspector Rowan Jackman and DS Marie Evans. This will be a war between the culprit and the police and in the end there will be only one winner… ready for The Patient Man?
This story is much deeper than I thought in the beginning, the police are searching for a snipper that is killing around town and while they are searching for this killer, Alistair Ashcroft will resurface again. If you haven’t read any of the previous books of the series, Jackman & Evans, you have to know that they have some history together, he is a psychopath and wants revenge.
This is the first case I’ve read of the Jackman & Evans series, but don’t worry you’ll follow the story perfectly, even if it’s a continuation of previous stories, the case is well explained and you understand the characters and their emotions. Because the group of detectives to investigate the case are not only co-workers, they are friends, a team, and when one of them is injured, all the others suffer.
The story will be told between the perspective of the detectives and the culprit vision, the police know who is he, but doesn’t know how to find him or his plans, they only know that he will try to do as much damage as possible.
It was an interesting cat and mouse story, a chess game between the police and Ashcroft, in which the reader never know who will win!
Ready to discover The Patient Man?

I was born in Kent but spent most of my working life in London and Surrey. I was an apprentice florist to Constance Spry Ltd, a prestigious Mayfair shop that throughout the Sixties and Seventies teemed with both royalty and ‘real’ celebrities. What an eye-opener for a working-class kid from the Garden of England! I swore then, probably whilst I was scrubbing the floor or making the tea, that I would have a shop of my own one day. It took until the early Eighties, but I did it. Sadly the recession wiped us out, and I embarked on a series of weird and wonderful jobs; the last one being a bookshop manager. Surrounded by books all day, getting to order whatever you liked, and being paid for it! Oh bliss!
And now I live in a village in the Lincolnshire Fens with my partner, Jacqueline, and our four Springer spaniels. I had been writing mysteries for years but never had the time to take it seriously. Now I write full-time, and as my partner is a highly decorated retired police officer; my choice of genre is a no-brainer! I have an on-tap police and judicial consultant, who makes exceedingly good tea!
I have set my crime thrillers here in the misty fens because I sincerely love the remoteness and airy beauty of the marshlands. This area is steeped in superstitions and lends itself so well to murder!
I am now lucky enough to have joined the amazing Joffe Books team of authors and am really enjoying being able to spend time doing what I love… writing