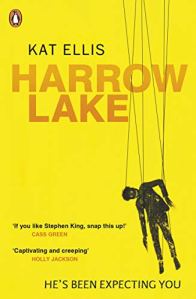 Lola Nox is the daughter of a celebrated horror filmmaker – she thinks nothing can scare her. But when her father is brutally attacked in their New York apartment, she’s swiftly packed off to live with a grandmother she’s never met in Harrow Lake, the eerie town where her father’s most iconic horror movie was shot.
The locals are weirdly obsessed with the film that put their town on the map – and there are strange disappearances, which the police seem determined to explain away.
And there’s someone – or something – stalking Lola’s every move.
The more she discovers about the town, the more terrifying it becomes. Because Lola’s got secrets of her own. And if she can’t find a way out of Harrow Lake, they might just be the death of her..

Harrow Lake is the only book you’ll have to read during sunlight, because at night it will scare you so much that you’ll have nightmares!
Let’s start saying that the story is based on a town where a famous movie was filmed, Nightjar, after that (1920) the town seem to have stopped; they have a lot of tourism from the old movie, but their core has remained the same.
We will meet Lola, the main character who seems that her family was part in the horror movie; director, main actress… All the story will begin when she will have to move to live with her grandmother at Harrow Lake, where to movie was filmed. Oh yes, you can expect a creepy atmosphere and some really weird characters; even their own boogyman!
Lola is a special character, don’t dismiss her, she seems too simple and pleasant, but without her this book wouldn’t be the same. She will be the one talking to the reader and showing the mysterious and real Harrow Lake.
This is a book to not dismiss, it’s creepy and twisted, like an old movie that you have no idea where the scare will appear but you can’t stop watching it! I don’t normally read horror books, but I loved this one, so believe me, take a chance on it.
Harrow Lake has scared and surprised me at the same time, different and twisted is a book I recommend you to read!
Ready to discover the real Harrow Lake?

Kat is a young adult author from North Wales. Her novels BLACKFIN SKY, BREAKER, and PURGE are available now in the UK and US, and her novella THE TWINS OF BLACKFIN features in the collection THREE STRIKES from Firefly Press. Her next novel, HARROW LAKE, will be published in 2020 by Penguin Random House Children’s.
When she’s not writing, Kat can usually be found adventuring in ruined castles and cemeteries, taking photos of weird and creepy things to inspire her writing.