The Lies I Tell by Joel Hames 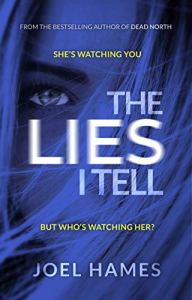 Meet Polly. Meet Emily. Meet Belinda.
They’re all me. My name is Lisa and I’m an identity thief. If I’m not inside your system stealing your money, I’ve probably already stolen it. I’m your friend. I’m a thief. I’m gone.
I’m in control.
Only now, the tables have been turned. I’m in danger. My son is in danger. And I don’t know where that danger’s coming from.
Any friend.
Any enemy.
Any stranger.
Anyone from the past I’ve been trying to outrun for years.
NOBODY CAN BE TRUSTED.

Are you who you say you are? In a moment when identity theft is something usual, who could validate that you are who you are saying? There’s one movie that I loved when I was young called “The Net” where the actress has her identity stolen and she doesn’t know how to prove that she is who she is. This book made me remember this movie; the fear that there’s no one who you can really trust but you have to prove that you are who you say you are.
This is the story of Lisa, she doesn’t have just one story but many, one for each identity she has stolen. Now she is afraid because someone knows her, the real her and is threatening her life and her son. Anyone could be the danger, who can she really trust? After so many years lying, who will believe the truth? Lisa is not an easy character to like, it will show you how dangerous and scary could be that someone tries to steal your identity, because anyone could face this danger. But Lisa has a past and as the reader learns all about it, you start to understand her and how she started her own path. I am not saying that I like what she does, but that there’s a motive to it.
I’ve read a lot of stories with identity thieves, but this one is original and twisted, because Lisa, the thief, is the one in danger, and she really doesn’t know who is after her. She knows that what she does is wrong, so without noticing, the reader will start caring for Lisa and her life, because it doesn’t matter how many lives she has stolen, you don’t want her hurt.
I’ll admit that I was totally glued to this story, impossible to stop reading and discover the truth within so many layers of lies and secrets. Ready to discover “The Lies I tell”?

Joel Hames lives in rural Lancashire, England, with his wife and two daughters, where he works hard at looking serious and pretending to be a proper novelist.
After a varied career in London which involved City law firms, a picture frame warehouse, an investment bank and a number of market stalls (he has been known to cry out “Belgian chocolates going cheap over ‘ere” in his sleep), Joel relocated from the Big Smoke to be his own boss. As a result, he now writes what he wants, when he wants to (which by coincidence is when the rest of the family choose to let him).
Joel’s first novel, Bankers Town, was published in 2014, and The Art of Staying Dead followed in 2015. The novellas Brexecution (written and published in the space of ten days following the UK’s Brexit referendum, with half of the profits going to charity) and Victims were published in 2016 and 2017 respectively.