Murder on the Downs by Julie Wassmer 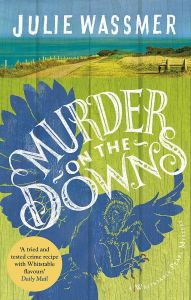 A controversial new property development is planned in Whitstable which will encroach upon the green open space of the downs, to the dismay of Whitstable residents who view this as the thin end of the wedge with regard to local wildlife conservation.
A campaign springs into life, spearheaded by a friend of Pearl's family, Martha Laker. A committed environmentalist, Martha is no stranger to controversy herself. She has also managed to divide opinion across town, with the locals viewing her as their fearless champion while establishment figures seeing only an interfering agitator.
Tensions escalate between the developers and Whitstable residents, straining Pearl's close relationship with London-born police officer, DCI Mike McGuire, who harbours concerns that the local campaign will spiral out of control. Pearl's loyalties are torn, but the protest duly goes ahead – and newspaper headlines claim a moral victory for the residents in this David and Goliath battle.
But the victory is short lived when Pearl discovers a dead body on the downs…

I always love to read a good cozy mystery, the neighborhood and the atmosphere makes me want to be part of the story and discover the culprit before anyone else! Murder on the Downs was not different, I loved discovering Whitstable, they have problems and conflicts like any small community but they try to be peaceful until death strikes. ready?
Pearl Nolan is the main character of the story, she is a brave and very interesting woman, this will not be an easy “adventure” for her, she will be torn between two sides of the village; the progress and the traditions, both sides have their good and bad side, but having to decide what’s the best is never easy! What would you do in her position?
What made this book so easy and quick to read is how the writer made it so easy to be part of the plot and get addicted to the story, impossible to guess who the killer is and the different possible scenes about the killer! That’s why I love to read cozy mysteries, it’s like watching a movie in my head with all these real characters on them and trying to be more smart than the detective!
This is the first book I’ve read of the Whitstable Pearl Mysteries series, but I can assure you it will not be the last. Pearl is one of those characters that make you keep reading and wanting to know more about their life and stories! You’ll be addicted, I am sure.
Ready to discover “Murder on the Downs”? 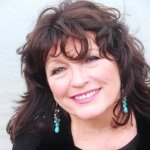 Julie Wassmer is a television drama writer who contributed for almost twenty years to the popular BBC series EastEnders.
She published her autobiography More Than Just Coincidence in 2010, in which she describes finding her long-lost daughter after an astonishing twist of fate. It was voted Mumsnet book of the year.
Book three in Julie's Whitstable-set crime series The Whitstable Pearl Mysteries – involving multi-tasking private detective-come-restaurateur, Pearl Nolan – was published in spring 2016, with books 4 &amp; 5 soon to follow
Julie lives in Whitstable and is well known for her environmental campaigning.