June was the “Pride Month”, the month of the LGBTQ+ community, the month we all should raise awareness of this big community. But I think that I, as a book blogger, am not doing enough to raise awareness, because I love to read but I don’t read much LGBTQ+ books and I think that this has to stop. If we all (it doesn’t matter your sexuality or ethnicity) don’t embrace the diversity in our community, they will never be fully accepted by everyone. So, from now on, I’ll try to read a book (and review) each month that has one or more members of the LGBTQ+ community. I mainly read mystery/thrillers and I don’t think I have many books were one or more of the characters are part of this community, so if you know one book that I should read, please don’t doubt to tell me!
This post is because I won an amazing bundle from Harper books, all of them of the LGBTQ+ community to fulfill my monthly objective. All these reads are YA and they look amazing, ready? 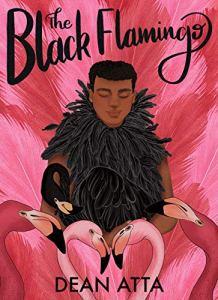 A boy comes to terms with his identity as a mixed-race gay teen – then at university he finds his wings as a drag artist, The Black Flamingo. A bold story about the power of embracing your uniqueness. Sometimes, we need to take charge, to stand up wearing pink feathers – to show ourselves to the world in bold colour.

Olivia Santos is excited for her last year at secondary school. But when a parent complains about LGBTQ+ content in one of the books, the library implements a new policy for withdrawing books. Olivia is distraught – she’s demisexual and knows how important it is for all readers to see themselves represented.
Luckily, she’s the mastermind behind The Paper & Hearts Society book club, and she knows exactly what to do: start a new club, find ways of evading the system, and change the policy for good!
With two book clubs to run, exams to prepare for, and a girlfriend, just how long will it be before Olivia burns out? After all, creating a book club and trying to get the #ReadWithPride hashtag to get noticed is going to take a lot of energy.
Sometimes, when you’re in too deep, it’s up to your friends to look out for you …

When Ollie meets Will over the summer break, he thinks he’s found his Happily Ever After. But once summer’s ended, Will stops texting him back, and Ollie finds himself short of his fairy-tale ending.
A family emergency sees Ollie uprooted and enrolled at a new school across the country – Will’s school – and Ollie finds that the sweet, affectionate and comfortably queer guy he knew from summer isn’t the same one attending Collinswood High. This Will is a class clown, a basketball jock and, well, a bit of a jerk.
Ollie isn’t going to pine after a guy who isn’t ready for a relationship. But as school life repeatedly throws them together, from music class to the lunch table, Ollie finds his resolve weakening.
With the noisy drama of their friends as the backdrop – from ambitious Juliette and frosty Lara, to big-hearted Darnell and king-jock Matt – Ollie has a decision to make.

On the eve of her divining, the day she’ll discover her fate, seventeen-year-old Lil and her twin sister Kizzy are captured and enslaved by the cruel Boyar Valcar, taken far away from their beloved traveller community.
Forced to work in the harsh and unwelcoming castle kitchens, Lil is comforted when she meets Mira, a fellow slave who she feels drawn to in a way she doesn’t understand. But she also learns about the Dragon, a mysterious and terrifying figure of myth and legend who takes girls as gifts.
They may not have had their divining day, but the girls will still discover their fate…

Alice lives in a world of stifling privilege and luxury – but none of it means anything when your own head plays tricks on your reality. When her troubled friend Bunny goes missing, Alice becomes obsessed with finding her. On the trail of her last movements, Alice discovers a mysterious invitation to ‘Wonderland’: the party to end all parties – three days of hedonistic excess to which only the elite are welcome.
Will she find Bunny there? Or is this really a case of finding herself? Because Alice has secrets of her own, and ruthless socialite queen Paisley Hart is determined to uncover them, whatever it takes.
Alice is all alone, miles from home, and now she has a new enemy who wants her head…

Seventeen-year-old Dinah needs to leave her home, the weird commune where she grew up. She needs a whole new identity, starting with how she looks, starting with shaving off her hair, her ‘crowning glory’. She has to do it quickly, because she has to go now.
Dinah was going to go alone and hitch a ride down south. Except, she ends up being persuaded to illegally drive a VW campervan for hundreds of miles, accompanied by a grumpy man with one leg. This wasn’t the plan.
But while she’s driving, Dinah will be forced to confront everything that led her here, everything that will finally show her which direction to turn… 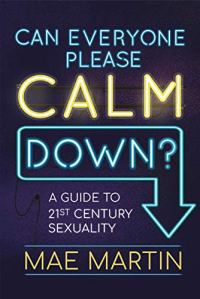 WHY DO WE FIND SEXUALITY SO, WELL … SCARY?
Comedian Mae Martin investigates in this hilarious and intelligent guide to 21st century sexuality. Covering everything from the pros and cons of labels, to coming out and the joys of sexual fluidity, Mae ponders all the stuff we get hung up about – and then a bit more.
Mae’s mission is to ensure that in a world that’s full of things to worry about, who we choose to kiss should not be one of them. And when it comes to sexuality, she asks:
CAN EVERYONE PLEASE CALM DOWN? 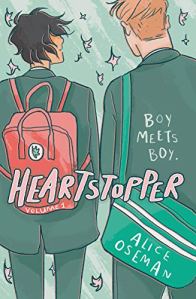 Charlie and Nick are at the same school, but they’ve never met … until one day when they’re made to sit together. They quickly become friends, and soon Charlie is falling hard for Nick, even though he doesn’t think he has a chance.
But love works in surprising ways, and Nick is more interested in Charlie than either of them realised. 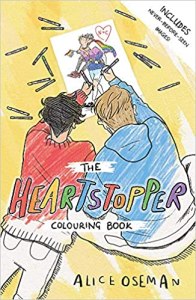 Boy meets boy. Boys become friends. Boys fall in love.
This beautiful colouring book contains all the fan favourite characters and scenes such as Nick and Charlie’s first kiss and their trip to Paris, plus guest appearances from Nellie, Tao and Ellie, Tara and Darcy and many more! Featuring some empty speech bubbles to fill in with your own creative thoughts, and the entire Tara/Darcy mini-comic to colour at the end, this book has something for everyone.
Celebrate the power of love and friendship, while becoming involved in the Heartstopper world in a truly interactive way.