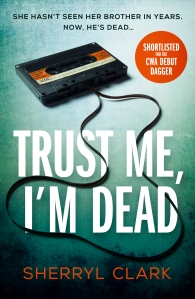 She hasn’t seen her brother for years. Now, he’s dead.
When Judi Westerholme finds out her estranged brother has been murdered, she assumes it’s connected to his long term drug addiction. Returning home, she is shocked to discover he had been clean for years, had a wife – now missing – and a child, and led a respectable life. But if he had turned his life around, why was he killed in a drug deal shooting? And where is his wife?
Desperate to know what really happened, Judi sets out to uncover the truth, even though it means confronting her own traumatic past. But she’s not the only one looking for answers…

Sounds good? Here is a Guest Post from the author with the books that changed her, take a look…

BOOKS THAT CHANGE US

It’s a common question to ask authors – what books changed you? My local newspaper runs this as a column in the review pages every Sunday. Can a book really change us? Or is it  more that it shifts our worldview – sometimes a tweak, sometimes an avalanche. These are some of the books that shifted me, moved me sideways, or are ones I have never forgotten because of what they showed me.

The Magician’s Nephew – C.S. Lewis
Yes, I know, lots of people have Narnia books as their favourites. But I really was that kid who went into their wardrobe and banged the unmoveable back wall in frustration, and wished with all my heart that I could simply leave my world and join everyone else in Narnia. I had no idea about the Christian elements in the story, and I hardly cared. I wanted to be a heroic fighter for all that was right in Narnia.

The Bone People – Keri Hulme
This was the first book by a New Zealand writer to win the Booker, but that came much later. My copy, still on my shelf, was an early one, published by the small press Spiral and Hodder &amp; Stoughton, and signed by Keri. This was an important book for me as a writer, because of the various ways she tells the story. There are far more experimental books now, but back then I read The Bone People and realised for the first time, ‘Oh, you can do that with a story!’

Pigs in Heaven – Barbara Kingsolver
I found this in a bookshop where it was a ‘staff pick’ and have loved Kingsolver’s books ever since (except for maybe The Poisonwood Bible). There is something about her characters and the worlds she creates that takes me away, and shows me different perspectives in a way that does ‘tweak’ my worldview. Small details like this one – ‘His idea of marriage is to spray WD-40 on anything that squeaks’ – are the things I love most.

Any poetry collection by Billy Collins
That’s cheating, probably, but I can’t remember which one I bought first, and I can’t choose a favourite. Collins reminds me that poetry can say a huge amount in a plain, lyrical voice, can make me stop in my tracks and think about something differently, can show me something new. I dislike poetry that is deliberately obscure and difficult. I think what I love most in Collins’ poetry is his voice. Lyrical, dry, often humorous, often insightful in ways you don’t expect.

Two short stories – ‘The Lottery’ by Shirley Jackson and ‘Singing My Sister Down’ by Margo Lanagan
If you want to read powerful short fiction, these are two of the best. Both of these stories show humans at their best and worst, both of them seem to take place in other worlds and yet, when you have finished reading, you know those worlds are ours, and they are not good places to live. Much food for thought here. I re-read both stories every few years, and love to share them with my students.

Sherryl Clark has had 40 children’s and YA books published in Australia, and several in the US and UK, plus collections of poetry and four verse novels. She has taught writing at Holmesglen TAFE and Victoria University. She recently completed a Master of Fine Arts program at Hamline University, Minnesota, and is now studying for a PhD in creative writing.