A Wash Of Black by Chris McDonald 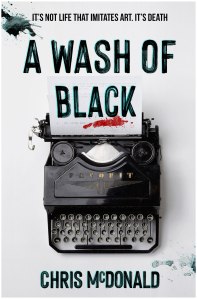 IT’S NOT LIFE THAT IMITATES ART. IT’S DEATH.
Anna Symons. Famous. Talented. Dead.
The body of a famous actress is found mutilated on an ice rink in Manchester, recreating a scene from a blockbuster film she starred in years ago.
DI Erika Piper, having only recently returned to work after suffering a near-fatal attack herself, finds she must once again prove her worth as the hunt for the media-dubbed ‘Blood Ice Killer’ intensifies.
But when another body is found and, this time, the killer issues a personal threat, Erika must do more than put aside her demons to crack the case, or suffer the deadly consequences.

No matter how many book detective series are you following, I can assure that you don’t want to miss the DI Erika Piper’s new series, is it worth the read!
Erika is the detective you’ve been looking for a long time but never quite finding it: brave, intelligent, perseverant… and human. This will be her first case after a work absence, of course the return will be much more interesting with this case to investigate. This is a book that you’ll finish without even noticing that the time has passed; narrated in first person, Erika will have to investigate “Blood Ice Killer” where the first victim is a famous actress… But Erika will have the help of his partner, there’s so much chemistry between them, and not in a romantic way!
But what makes this book so addictive is how the author has created so many interesting characters and subplots without the reader noticing the complexity of the story, it simply flows and drags the reader to the core of the story.
I don’t want to make any spoilers, but I really can’t wait to read the new book with DI Erika Piper, I hope it will be soon, very soon…
Original, addictive and gripping, A Wash Of Black is the case you need to read today, close the tv and start reading!

Originally hailing from the north coast of Northern Ireland and now residing in South Manchester, Chris McDonald has always been a reader. At primary school, The Hardy Boys inspired his love of adventure, before his reading world was opened up by Chuck Palahniuk and the gritty world of crime.
He’s a fan of 5-a-side football, has an eclectic taste in music ranging from Damien Rice to Slayer and loves dogs.