The Silent House by Nell Pattison 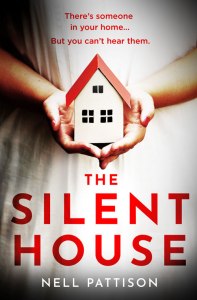 If someone was in your house, you’d know … Wouldn’t you?
But the Hunter family are deaf, and don’t hear a thing when a shocking crime takes place in the middle of the night. Instead, they wake up to their worst nightmare: the murder of their daughter.
The police call Paige Northwood to the scene to interpret for the witnesses. They’re in shock, but Paige senses the Hunters are hiding something.
One by one, people from Paige’s community start to fall under suspicion. But who would kill a little girl?
Was it an intruder?
Or was the murderer closer to home?

This book attracted my attention since the first page, one night a young girl is killed on her bed. The only people in the house were her brother and sister and her parents, so who could possibly have killed her? Accident or murder, you’ll have to read it to discover the truth!
This is not an easy case, let’s be honest, when there are little kids involved everything seems much worst and horrible, the worst nightmare of any parent is discovering that your kid is dead on their own bed, making you doubt if you checked them before going to sleep, if they had made a sound and you didn’t listen it… I am sure I wouldn’t be able to sleep ever again!
But let’s talk about the book, both parents are deaf, so possibly that’s why they didn’t listen to anything weird during the night, but the main questions remain the same, it is an accident or there’s something much darker behind the death of this little girl?
The story is told by the interpreter, Paige Northwood, who will connect the family with the police, “trying” to help the detectives with the investigation and the family in these horrible moments. The problem is that Paige knows the family and has a connection with them, so she cannot stay away from the investigation and starts asking questions to discover the truth.
This is a case where you doubt from everyone, because neither of the parents or family members seem trustworthy and all seem to hide something and not telling the truth to the police, so this challenges the reader who is trying to discover the truth. I would only say that I didn’t like much either of the police detectives, but I think that’s what the author wanted, you don’t have to like all the characters in a book to like the story. So I’ll keep my opinions of them in my mind, read it and tell me what you think about them!
The Silent House has been a quick read, from the beginning it intrigued me and kept me guessing till the last page, so a totally recommendable book if you want an original read! Ready to enter to The Silent House?

After studying English at university, Nell Pattison became a teacher and specialised in Deaf education. She has been teaching in the Deaf community for 12 years in both England and Scotland, working with students who use BSL. Nell began losing her hearing in her twenties, and now wears hearing aids. She lives in North Lincolnshire with her husband and son. The Silent House is her debut novel